Market risks are high so proceed with caution

As we head into the new heating season, I thought that we might take a look at some elements that could impact the heating oil market this winter, namely the weather, geopolitics, and distillate inventory levels. How does each of these affect our outlook for the coming season? Let’s dive in.

According to the Farmers’ Almanac Extended Forecast, the Northeast is expected to see an active storm season this upcoming winter, with more snow than last year and significantly below-normal temperatures forecasted for December and January. February is expected to be a bit warmer in the region. Midwestern states, especially those around the Great Lakes, are expected to see unreasonably cold winter, particularly in January, as temperatures could fall to 40 degrees below zero. These below-normal temperatures could affect travel and therefore cause a drop in the demand for gasoline, but could also lead to increased demand for heating oil as people tend to stay at home more.

Another forecast that we might look at to help determine or estimate heating oil demand is the heating degree day forecast. A heating degree day (HDD), of course, represents the number of degrees that a day’s average temperature is below 65 degrees Fahrenheit. The National Oceanic and Atmospheric Administration (NOAA) forecasts an average of 3,630 heating degree days for the U.S. (population-weighted average) from October 2022 through March 2023, which is above the previous 10-year average of 3,606 HDDs and exceeds last heating season’s 3,454 HDDs. New England is expected to see 5,212 HDDs this winter, which is also greater than the 5,061 HDDs seen last winter but slightly below the 10-year average of 5,255 HDDs.

Meanwhile, the Atlantic hurricane season has been relatively quiet as of mid-September, with only five named tropical storms, out of which two strengthened into hurricanes (Danielle and Earl) – neither posing any threat to the U.S. mainland. Last year we saw the third most active hurricane season of all time with a total of 21 storms and seven hurricanes. By mid-September last year, there were 14 storms, including six that strengthened into hurricanes, with Grace and Larry reaching Category 3 and Ida reaching Category 4 strength on the Saffir-Simpson Scale. Even though this season has been relatively mild compared to last, the NOAA continues to predict an above-normal Atlantic hurricane season. However, NOAA lowered its forecast for the likelihood of an above-normal season from 65% in May to 60% in August and revised upward the likelihood of near-normal activity from 25% to 30%. Although we have passed the peak of hurricane season, there is still time to see more activity in the Atlantic as the season ends November 30. NOAA’s updated forecast still calls for a total of 14 to 20 named storms, of which six to 10 could become hurricanes. Three to five of those could become major hurricanes. 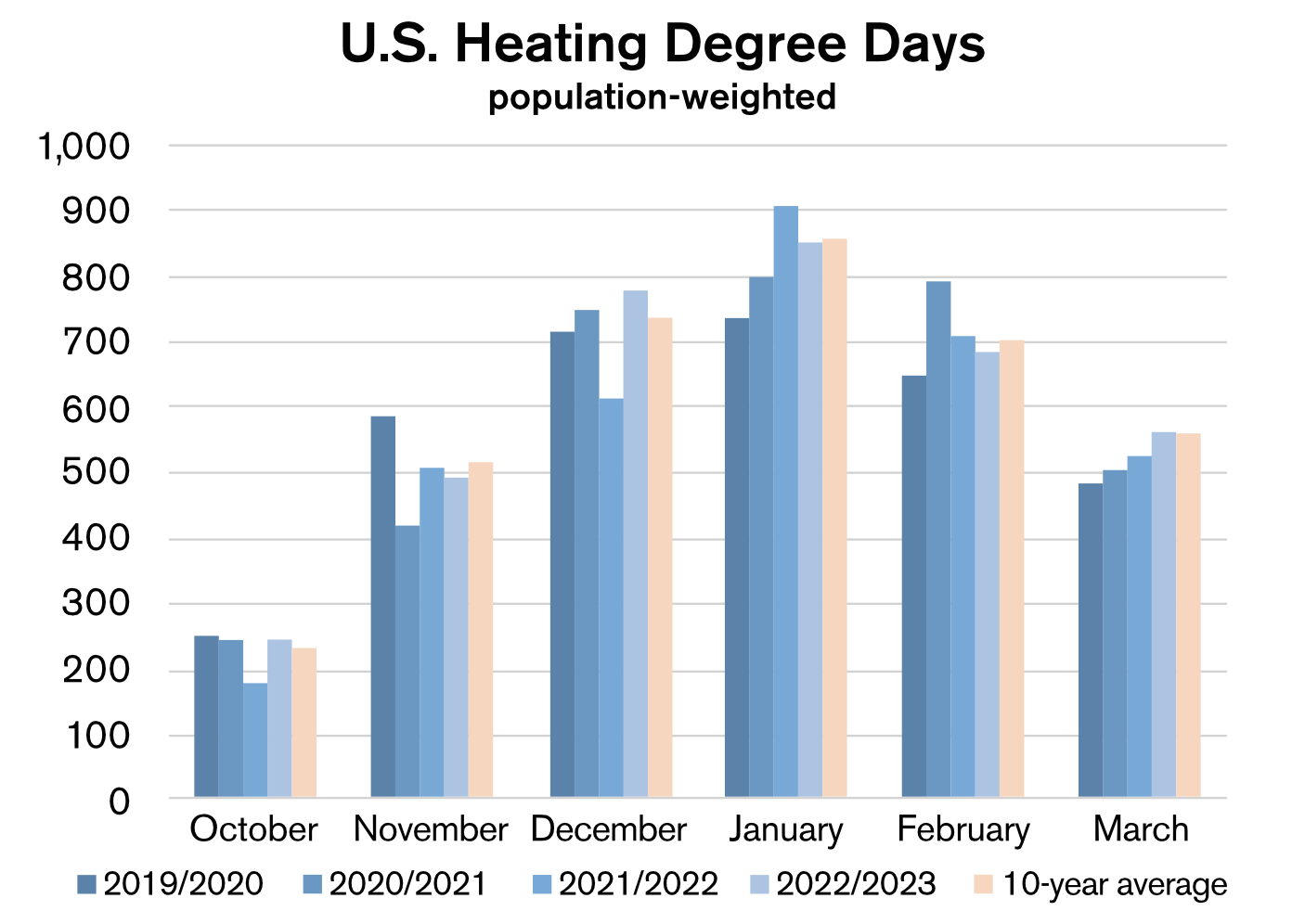 Since the Russian invasion of Ukraine earlier this year, all eyes have been on tensions in the oil market and the energy war between Russia and Western nations, particularly in the European Union. Russia has reduced its natural gas exports to Europe via the Nord Stream 1 pipeline to just 20% of capacity and cut oil exports as a response to sanctions imposed by the EU. These sanctions include a plan released by the European Commission in May to ease out of about two-thirds of Russian fossil fuels imports by the end of the year. After Russia halted natural gas exports to Europe for 10 days in July, citing maintenance on Nord Stream 1, and then reopened the pipeline at a significantly reduced rate, natural gas prices in Europe surged to new highs, causing a new crisis in the energy market. The EU has already asked its member states to voluntarily reduce natural gas consumption by 15% as it prepares for the upcoming winter under these unprecedented circumstances, but the EU could declare an emergency and try to make this mandatory with immediate effect.

The natural gas shortage in Europe could lead to large-scale gas-to-oil switching for heating and power generation. The International Energy Agency has estimated this will absorb 700,000 barrels per day on average from October through March, almost double last year’s amount. In order to fight surging gas prices, EU members were debating whether or not to impose a price cap on Russian natural gas in early September. Under such an arrangement, countries would still be able to buy Russian gas but only as long as the price did not exceed an agreed-upon threshold. Russian President Vladimir Putin threatened that if a price cap were imposed, the country’s natural gas exports to Europe would be completely halted. As of this writing in mid-September, the EU had not agreed on a price cap plan as several members, including Italy, Poland, and Greece have expressed opposition to this proposal. The Group of Seven countries have nonetheless started working on a plan to cap the price of Russian oil in order to limit Russia’s ability to finance the war in Ukraine, but no details had been released at the time of this writing. 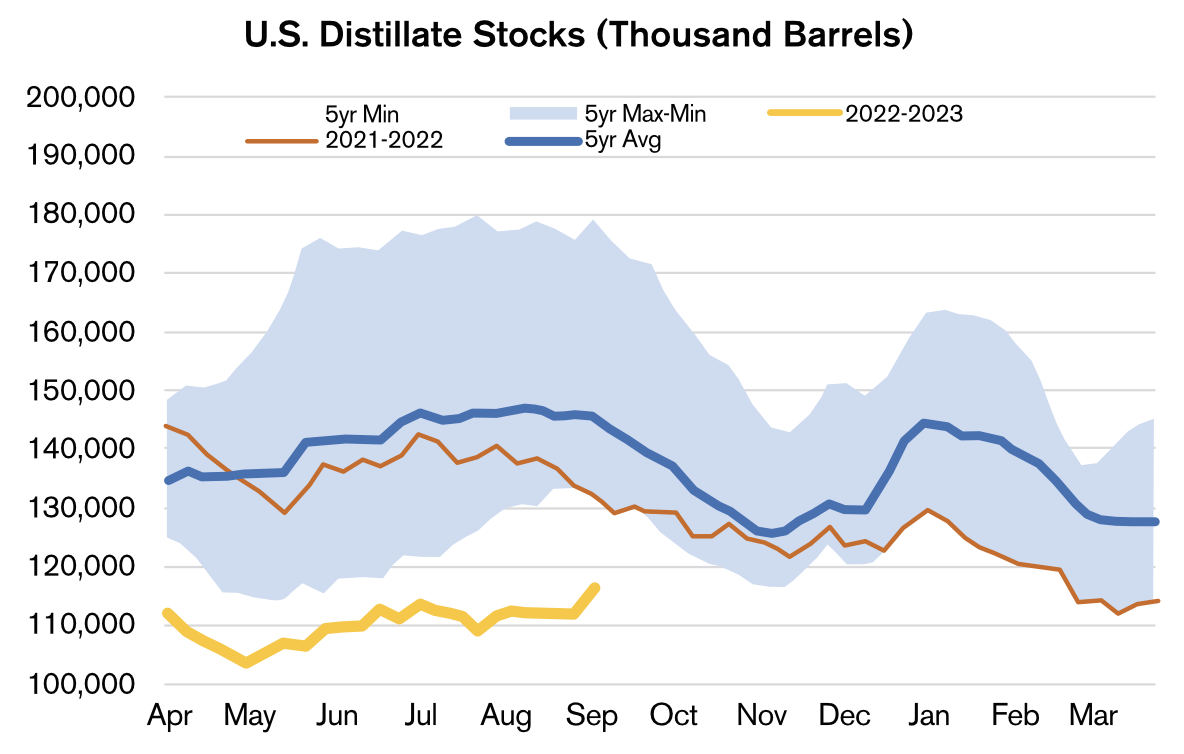 As of early September, U.S. distillate inventories remained well below both the five-year average and last year’s levels. Per the Energy Information Administration’s (EIA’s) Weekly Petroleum Status Report for the week ended September 9, total distillate stockpiles stood at 116.02 million barrels (mb), which is 12.0% lower compared to last year and 20.2% below the five-year average for the week. (Editor’s note: see “A Dearth of Distillate” for regional levels.)

Additionally, the NYMEX ULSD futures forward curve was backwardated, meaning that the spot price was higher than prices for delivery in future months. On September 14, the November 2022 ULSD futures contract was trading at about $3.38 per gallon (gal) while the October 2023 contract was trading at $2.85/gal. This structure provides economic disincentives for storage operations, and with already weak inventory levels there is an elevated risk for basis blowouts this winter, all else being equal. Historically, chances of a basis blowout are higher during the January-through-April part of the heating season compared to October through December. 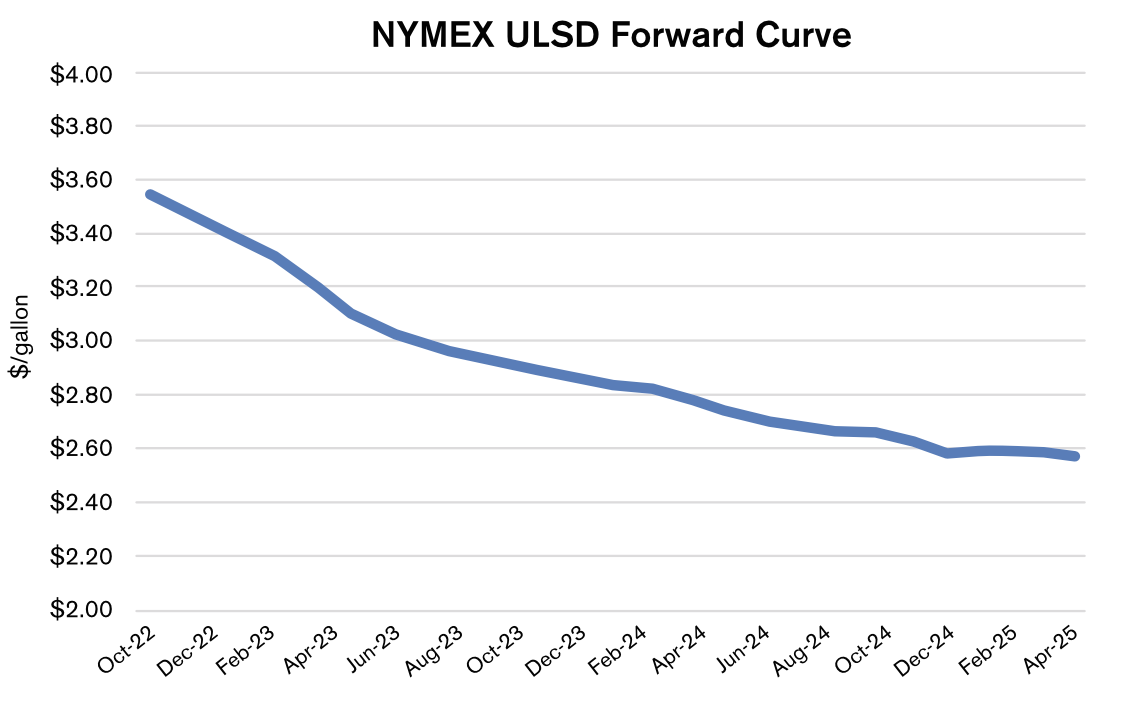 Weather and heating degree day forecasts look supportive for heating oil demand as we head into the new heating season. However, with heightened geopolitical tensions in Europe and low energy supplies, which could lead to an even deeper crisis across the continent, volatility in the oil markets remains high. Furthermore, energy inventory levels in the U.S. are also below their five-year averages, with emergency crude oil stocks in the Strategic Petroleum Reserve falling to 434.1mb in the week ended September 9, their lowest level since October 1984 according to the U.S. Department of Energy. With all this in mind, it looks like we are heading into an uncertain and volatile heating season — in terms of both basis and outright price action — and should proceed with caution.