Cash market price differentials to front-month NYMEX HO futures shot up in April and remained highly elevated as of this writing in early May. Those without any basis protection found themselves paying elevated prices at the rack, without an offsetting payout from hedges tied to futures. While delivery volumes in April were much smaller than in January, for instance, the impact of this price spike was still significant. Platts New York Harbor Ultra-Low Sulfur Heating Oil (ULSHO) barge price differentials to spot NYMEX jumped from an average of just +2.50 cents in the January-February period to +11.50 cents in March and over 20 cents in the final days of April then skyrocketed to 55.30 cents on the final day of the month. To illustrate the problem, let’s look at a capped price program hedged two ways.

First, what happens when we hedge a capped price program with only paper hedges – namely call options? These call options compensate us for any increase in the NYMEX HO futures price above and beyond the strike price, thereby offsetting the futures price risk engendered in offering the customer a price cap. However, these call options only provide protection against fluctuations in the NYMEX HO futures price, so any fluctuation in the rack price that is not mirrored in the futures price (a change in basis) is not compensated for. In the situation where cash differentials weaken, this is not a problem, but in the situation we saw late this heating season, it was impactful. How could we have mitigated this risk? We could have instead protected our capped program with a combination of wet barrels and put options. The wet barrels provide a fixed physical price, so that increases at the rack are not a concern, and the put options provide downside protection for that physical price, should rack prices fall.

Here is an example to illustrate. During the summer hedging season, the NYMEX price is $3.00 per gallon (g) and basis is 10 cents, putting the rack price at $3.10/g. The following April, the NYMEX price has jumped to $4.00/g, but basis has increased by 90 cents to $1.00/g, putting the rack price at $5.00/g. Our call options, which had a $3.00 strike, compensate for the $1.00 rise in the NYMEX price, but there is nothing to compensate for the 90-cent increase in basis. By contrast, if we had locked in a $3.00/g wet barrel and a $3.00 put option, we would be paying the $3.00/g for the wet barrel, and the option would simply be out of the money. We would thus be unaffected by the increase in basis. 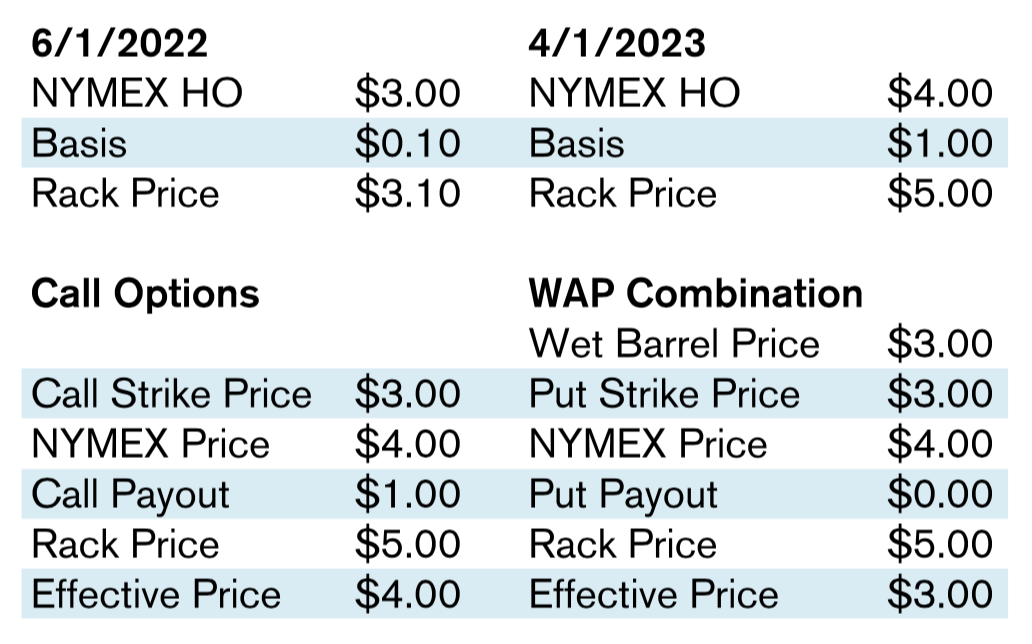 It should be noted that in both cases we are taking a position on basis, either long or short. The wet barrel/put option combination gives us a long basis position: our relative financial position improves as basis strengthens, because we have locked in basis with the physical contract. Had basis instead weakened from 10 cents to 5 cents, the call option strategy would have been favorable, as this takes a short position on basis. This provides two strategies to hedge capped price program gallons, but how about fixed price gallons? In this case, the two options are futures or swaps (short basis) versus wet barrels (long basis). We can also obtain a position on basis for our variable or market price gallons using fixed differential agreements with suppliers. When would be most advantageous to use one strategy versus another? All else equal, periods where basis is more likely to blow out would be the time to lock in differentials. What does the historical data have to say about when these might be? 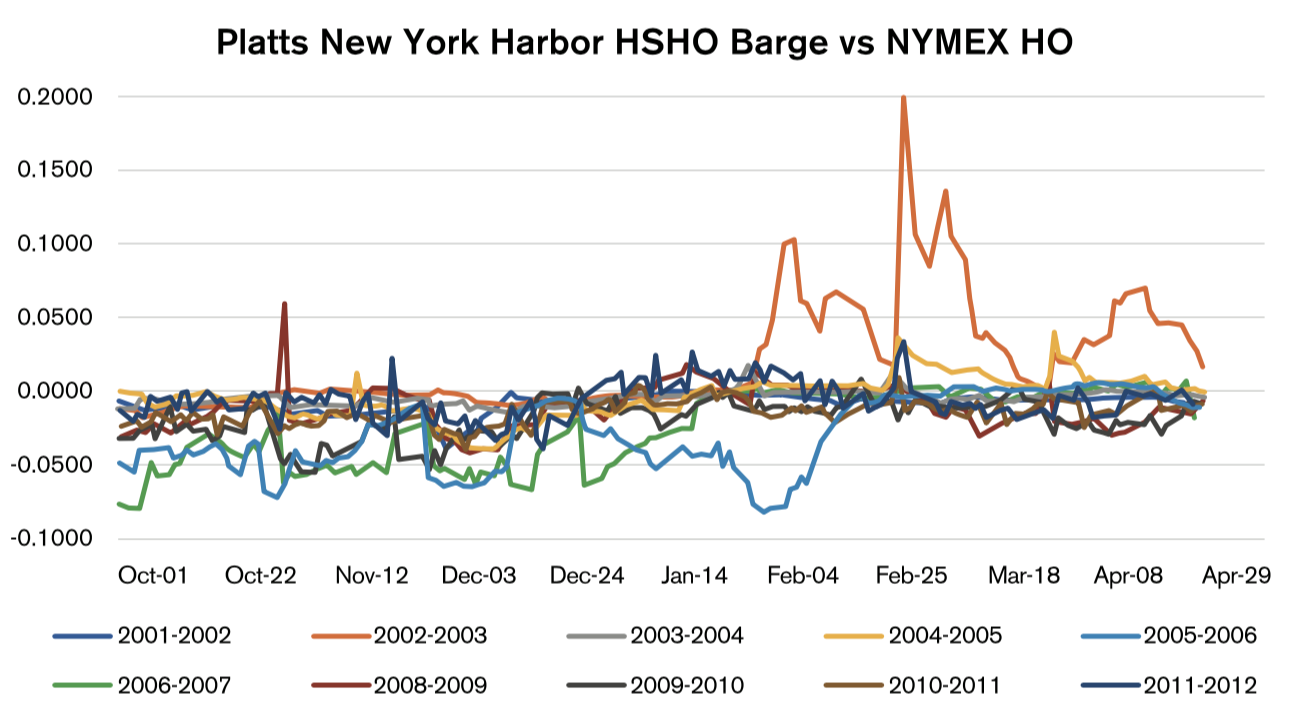 If we look at Platts New York Harbor High Sulfur Heating Oil (HSHO) barge price differentials to spot NYMEX HO over the October through April heating seasons from 2001 to 2012, a clear pattern develops. Differentials are weaker on the front end of the heating season relative to the back end. There are dramatic events, such as the spikes in differentials in the 2002-2003 and 2006-2007 heating seasons, but the pattern holds true even if we simply compare the average differentials for October-December against January-April. New York State began limiting sulfur content in heating oil to under 15 parts per million (ppm) in July 2012, and NYMEX HO futures moved to a ULSD specification beginning with the May 2013 contract. Looking at ULSHO differential data from the 2013-2014 season through the latest heating season, we can see that the same pattern of stronger differentials on the back end remains evident. 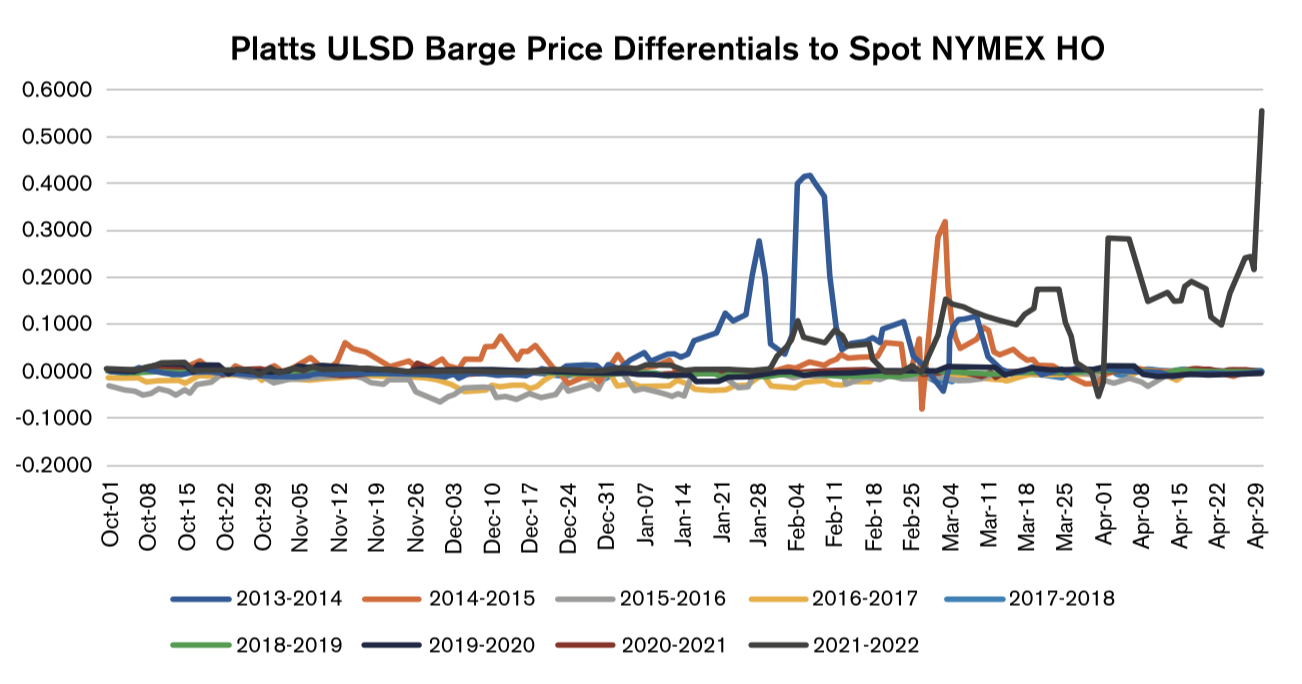 This pattern makes sense if we consider inventories. Stock levels provide a cushion against adverse market events that could put downward pressure on supplies and upward pressure on prices, such as logistical problems like a pipeline mishap, supply issues like a refinery shutdown, or a spike in demand from unusually cold weather. Because temperatures are colder in January and February (boosting heating demand), and because refinery maintenance and retooling operations impact production ahead of the summer driving season, inventories tend to be weaker and falling in the tail end of the heating season. 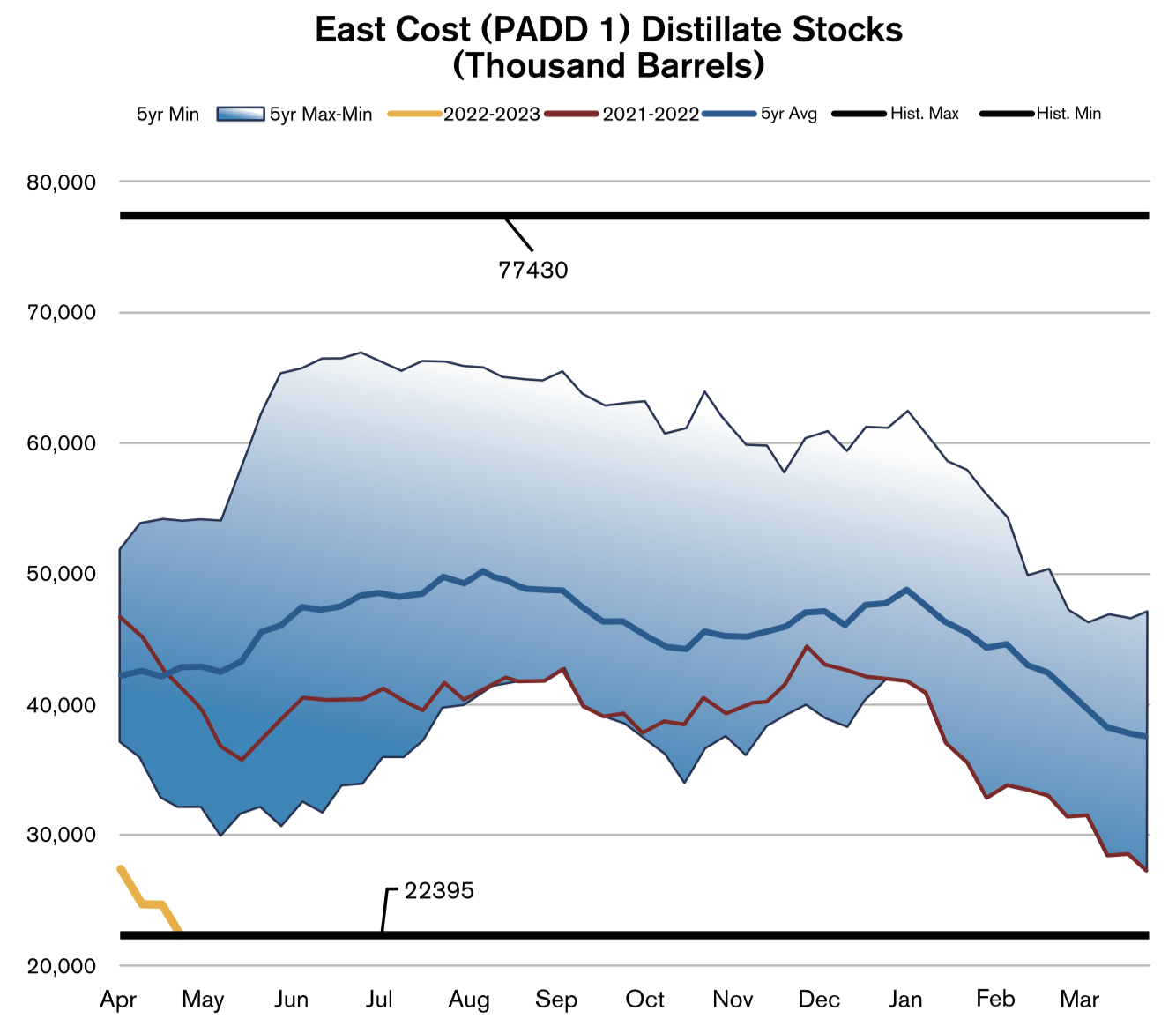 We would then expect that, all else equal, basis blowouts would be more common in seasons where inventories are concerning – either due to their absolute levels compared to historical levels, or due to an alarming decline. Looking back to 2009, we can see that ULSHO differentials were strong from the 2009-2010 through 2011-2012 seasons, and we saw declining inventories relative to the five-year average during this time – although levels were elevated compared to said average. Stronger evidence for this hypothesis comes from the spikes that occurred in the 2013-2014 and 2021-2022 seasons, as these both came amid weak stock levels compared to the five-year average.

Every heating season will be different, but all else equal, the historical data seem to suggest that the dangers of a basis blowout are higher during the January-to-April part of the heating season, so hedging some portion of your program or even variable gallons using fixed differentials may be advantageous. Your hedging partners should be well versed in these strategies, and others, to help protect your margins.

Dan Lothrop is Head Trader at over-the-counter derivatives company Northland Energy Trading LLC. He can be reached at 800-709-2949 or daniel@hedgesolutions.com 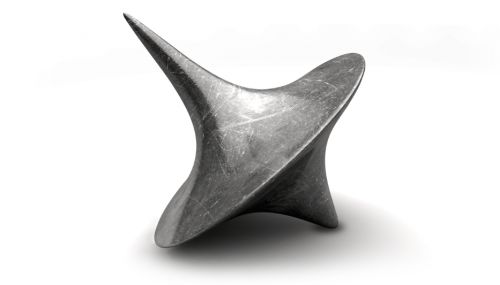