The RFS rule also finalized EPA’s recently proposed method for estimating future small refinery exemptions (SREs). According to the final rule, EPA will estimate SREs for 2020 using the three-year average of the number of annual exemptions recommended by the Department of Energy from 2016-2018.

“Consistent with these changes, we are also announcing our general policy approach to small refinery exemptions going forward, including for now-pending 2019 petitions as well as for future 2019 and 2020 petitions,” the final rule states. “Although final decisions on any exemption petition must await EPA’s receipt and adjudication of those petitions, EPA intends to grant relief consistent with DOE’s recommendations where appropriate. This policy extends to DOE’s recommendations of partial (50%) relief: where appropriate, we intend to grant 50% relief where DOE recommends 50% relief.” 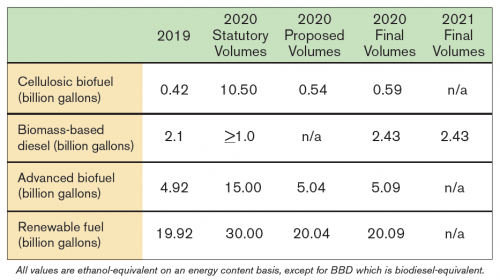 Shortly after the rule was finalized, the National Biodiesel Board (NBB) expressed its disappointment with EPA’s decision to stagnate advanced biofuel and biomass-based diesel volume requirements, as well as the agency’s decision on the SRE method. NBB contends that the new SRE method significantly undercounts exemptions.

“EPA’s final rule for the 2020 RFS volumes is simply out of step with Congressional intent and President Trump’s promises,” said NBB Vice President of Federal Affairs Kurt Kovarik. “Congress and the president are extending the biodiesel tax incentive through 2022 and sending an unmistakable signal that they support continued growth of biodiesel and renewable diesel. At the same time, EPA Administrator Wheeler is doing everything he can to block that growth.”

President Trump committed to our nation’s farmers that biofuel requirements would be expanded in 2020. At the EPA we are delivering on that promise and ensuring a net of 15 billion gallons of conventional biofuel are blended into the nation’s fuel supply.”

Kovarik countered, “Despite his statement to the press, Administrator Wheeler’s method for estimating future small refinery exemptions does not provide assurance to the biodiesel and renewable diesel market. The best estimate of future exemptions is an average of the 38 billion gallons exempted over the past three years. Even if EPA had included that estimate, though, there is nothing in today’s rule to ensure that the agency will get these exemptions under control.”

The SRE estimate applies equally to the overall, advanced, biomass-based diesel, and cellulosic biofuel renewable volume obligations (RVOs). While intended to ensure that the 2.43 billion biomass-based diesel volume for 2020 is fulfilled, the number of exempted volumes could still exceed EPA’s estimate.

In the rule, EPA defers a final determination on the U.S. Court of Appeals’ remand of the 2016 RFS rule, in which the agency waived 500 million gallons of biofuel use. “The biodiesel industry asks EPA to fulfill the Court’s clear direction to restore the 500 million gallons from 2016,” NBB said. “The agency has recognized that it must ensure that the RFS volumes are met. EPA must be consistent.”