La Niña Winter Unfolds But Not Without Surprises

As I penned this article on December 2, 2020, the Northern Hemispheric pattern was in a state of flux. If the trends that were being portrayed at that time were correct, you will be reading this update as a widespread colder than normal pattern takes hold across much of the north-central and northeastern U.S. If not, then this will be another failed attempt by Mother Nature to produce a meaningful cold start to winter.

The Pacific basin is certainly locked into a moderate La Niña configuration. Figure 1 (below) shows what the sea-surface temperature anomaly looked like as we opened up December. Note the solidly colder than plume of water running from the west coast of South America westward across the equatorial Pacific. This has the look of a classic La Niña event. 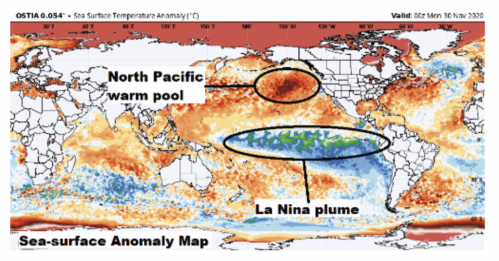 At the same time, note the continuation of a strong warm pool across the northeast Pacific, off the west coast of Canada and south of Alaska. I have harped about this warm pool each of the past several winters since I believe it is a favorable feature for western Canadian ridging. But as we shifted into the true start of the winter season, this warm pool managed to weaken or completely fall apart by the time we got to January. Right now, it is holding strong. If it manages to stay intact, this would bode well for the mid-winter period. Obviously, the mid- to late-December period trends in this area will be critical.

As we moved through November into very early December, the pattern grew increasingly volatile. Volatility was a hallmark of many La Niña winters in which one month (usually December) ran cold, the next month (January) flipped warm and then the last month (February) trended close to normal.

Once into mid-November, the modeling trends indicated that the expected winter pattern — cold December, warm January and normal February — was going to be thrown for a loop. For several days in a row, the modeling was adamant that the upper air pattern moving into and through December would not feature a typical La Niña cold December configuration. 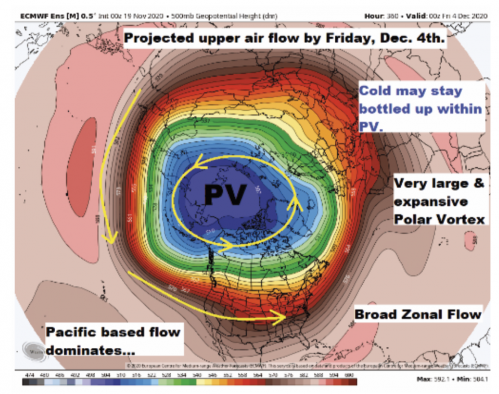 Figure 2 (above) shows what late November modeling forecast the upper air flow would look like once into early December. Note the expansive/dominating look to the Polar Vortex.

This configuration would lead to a long running broad zonal flow (west to east) from the Pacific on across the U.S. This means mild Pacific air would dominate the continental U.S. and wide-ranging above normal conditions would prevail.

The depicted pattern did try to develop during late November and very early December and led to a period of well above normal conditions and a top-five warmest November month for several Northeast locations. However, the projected early mid-December upper air flow was not able to lock in and the overall look of the early winter pattern started to look more like an El Niño event.

So, while the sea-surface temperatures across the Pacific are clearly in a La Niña state, the upper level flow across the Northern Hemisphere has taken on a flow regime more typical of an El Niño with strong upper level ridging sitting across the western Canada, along with a split Polar Vortex.

Figure 3 (below) shows how the early December modeling projected the upper level flow regime would look like by the time we hit December 16. 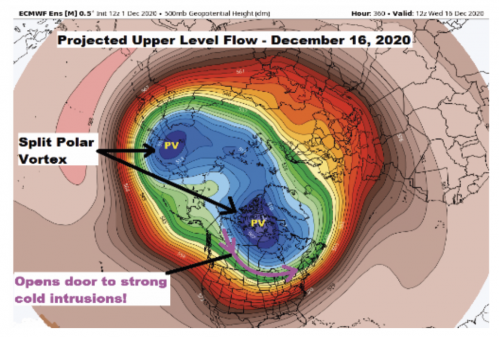 Instead of having one dominating Polar Vortex, the pattern evolution is expected to feature a split vortex with one center displaced across the eastern hemisphere, while a second lobe of the vortex is expected to drop on across Hudson’s Bay. This configuration trend, if it indeed verifies, opens the door to significant, widespread polar and/or arctic intrusions coming southward into the central and eastern portions of the U.S.

The questions will be how stable and lasting the pattern will be and whether or not western ridging can be amplified enough to allow for true Arctic intrusions during the mid- and/or late-December period.

Overall, this trend puts the basic La Niña forecast back in play, but I’m not convinced we are looking at a true La Niña pattern given its mix of La Niña and El Niño signals. 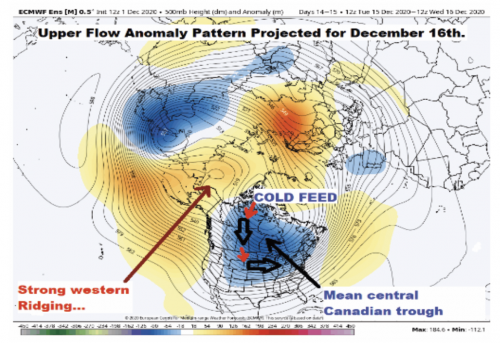 Looking at the upper level anomaly predicted to develop by December 16 (Figure 4, above) can give a truer feel for how the pattern may play out.

The forecasted upper level height chart certainly has a cold look to it with strong western ridging shown by the positive anomalies from Alaska northward into the western Arctic region.

If we maintain the warm pool across the northeast Pacific, it is possible the general pattern depicted in the evolving upper air pattern could have legs into or through late December.

There is always uncertainty about the stability of any early winter pattern. Given the difficulty in maintaining cold patterns over the past two or three winters, I don’t think anyone can say with confidence the forecasted pattern will lock in for an extended stay.

I wrote this article on December 2 and at that time the modeling was certainly trying to project a stabilizing cold pattern as we headed into mid-December. Hopefully, as you read this update, the pattern evolution has behaved. If it has, the modeled temperature anomaly pattern should look something like Figure 5 (below). 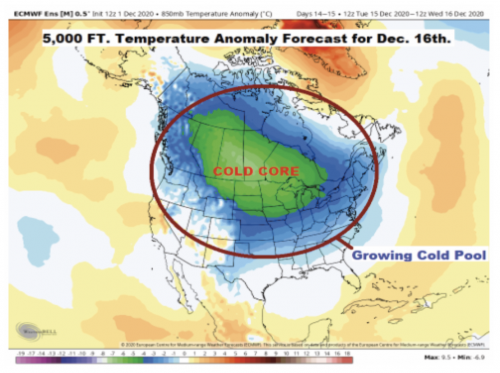 The look of the projected anomaly pattern clearly puts the colder than normal December back in play, after the late November warm concern. The core of the cold would be positioned across central Canada on southward into the north-central states. While the general look of the cold anomaly is very La Niña-like it is more widespread than normally seen and actually better fits an El Niño cold look.

Based on the medium range modeling trends as we moved into early December, my call for significant cold occurring during December, mainly the mid- and late-month period, stands.

The nail-biting part of the winter forecast arrives late in December when we normally would be ready to flip to the warm January forecast often seen during La Niña events.

Even though I have indicated the large-scale pattern has both La Niña and El Niño characteristics, I cannot at this time abandon the basic La Niña winter forecast, which indicates a pattern transition into a warmer regime once fully into January.

Given the look of the December warm pool across the northeast Pacific and the split Polar Vortex, it would not take much to ease January back closer to normal. But it is hard at this time to just throw on the classic La Niña composites.

If we move through mid-December and the medium range modeling trends continue to show a disrupted or split Polar Vortex with the northeast Pacific continuing to run warmer than normal, we would need to quickly reassess the January forecast prior to December 20.

For now, the call for a normal to moderately colder than normal mid- and late-December period looks solid before any shift into a mid-winter moderation. 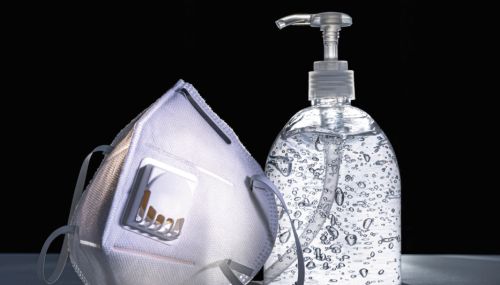 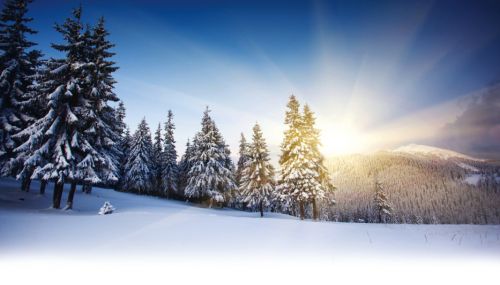 La Niña Winter Unfolds But Not Without Surprises 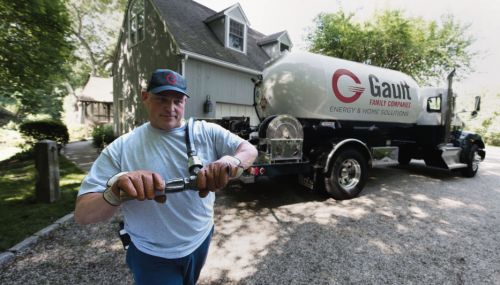 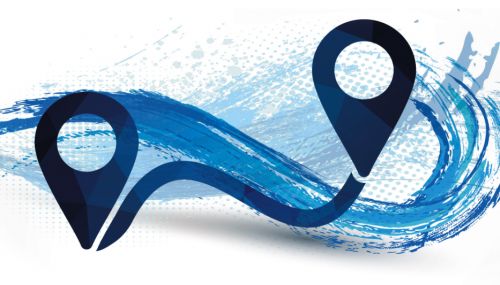