In the January 2019 update of its Short-Term Energy Outlook (STEO), the U.S. Energy Information Administration (EIA) includes the effects that upcoming changes to marine fuel sulfur specifications will have on crude oil and petroleum product markets. Set to go into effect January 1, 2020, the new International Marine Organization (IMO) regulations limit the sulfur content in marine fuels used by ocean-going vessels to 0.5% by weight, a reduction from the previous limit of 3.5%. The change in fuel specification is expected to put upward pressure on diesel margins and modest upward pressure on crude oil prices in late 2019 and early 2020.

Residual oil — the long-chain hydrocarbons remaining after lighter and shorter hydrocarbons such as gasoline and diesel have been separated from crude oil — accounts for the largest component of marine fuels, also known as bunker fuels, used by large ocean-going vessels. Marine vessels account for about 4% of global oil demand. Removing sulfur from residual oils or upgrading them to more valuable lighter products such as diesel and gasoline can be an expensive and capital-intensive process. Refineries have two options for residual oils. They can either invest in more downstream units to upgrade residual oils into more valuable products, or they can process lighter and sweeter crude oils, which produce less residual oils and the sulfur content therein.

EIA expects that once implemented, the new IMO fuel specification will widen discounts between light-sweet crude oil and heavy-sour crude oil grades, while also widening the price spreads between high- and low-sulfur petroleum products. In the January STEO forecast, Brent crude oil spot prices increase from an average of $61 per barrel (b) in 2019 to $65/b in 2020, and about $2.50/b of this increase is attributable to higher demand for light-sweet crude oils that are priced off of Brent. 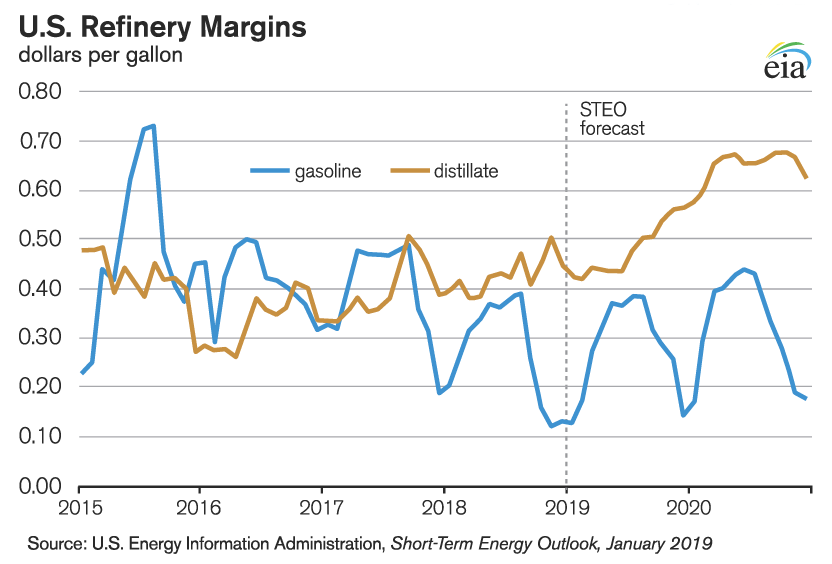 Based on the most recent data available, U.S. consumption of bunker fuel was about 0.3 million b/d, and EIA expects the overall effect on product supplied to be very small. In the bunker market, a modest shift from residual fuel use to distillate is likely. However, uncertainty exists regarding the IMO-compliant fuel specification and, in turn, what its supply chain will look like. As a result, the distribution of individual fuels is uncertain.

The EIA’s 2019 Annual Energy Outlook will reflect the long-term implications of the new sulfur requirements. Oil & Energy will include these projections in our upcoming March issue.